A smoke detector, also known as a smoke alarm, play a major role in protecting members of the household during an emergency. Smoke detectors are exactly what their names entail, they detect smoke. These devices are integrated with “photoelectric” sensors that detect light, not actual smoke.

Smoke detectors work by detecting light interruption. The onboard LED generates a light that stretches straight across the interior chamber. When the photoelectric sensor detects an interruption in the light caused by the smoke entering the housing, an alarm is triggered.

Why Do Smoke Detectors Sense?

House fires are often associated with a problem within the electrical system. Of course, this is not always the case since fires can be the result of improper handling of cigarettes, matches, cigars, and lighters.

House fires have also been associated with malfunctioning cooking equipment, damaged portable heaters, mishaps where grease comes into contact with hot burners, and electrical faults within the home’s electrical system.

Smoke detectors have a broad range of benefits, including:

The most popular type of smoke detector runs on battery power. The installation does not require snipping, twisting, or connecting electrical wires. Remove the rear plate and attach it to a flat surface like a wall or ceiling utilizing the included installation hardware.

You never need to worry about battery replacement, which is a major issue when the user-interface does not have a battery indicator light. You are left guessing the battery power level. To minimize this risk, many manufacturers are opting for batteries that offer a longer runtime. Even these batteries can result in a full malfunction if it is not detected early on.

As mentioned previously, smoke detector batteries are designed to offer a specific runtime, some more than others. Without a battery power indicator light, homeowners are left guessing the battery power level. To avoid malfunctions associated with dead or weak batteries, it is recommended to do the following:

Smoke alarms should be installed in specific areas of the home. A single smoke alarm will not provide whole-home smoke protection. Contact our office to request a free hard-wired smoke detector installation quote. 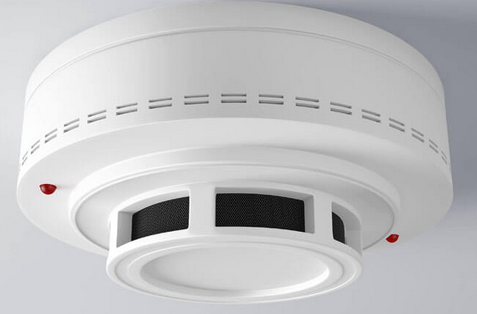